Gifts of Time and Treasure 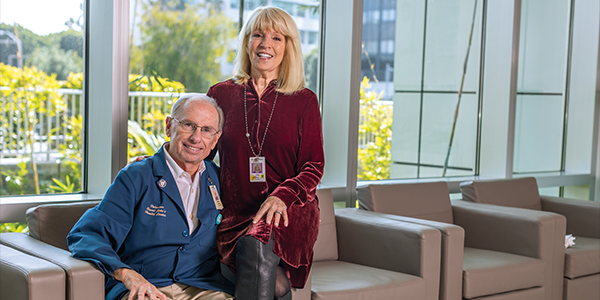 Chuck and Judy Beck give to Saint John's to help the community.

Chuck and Judy Beck first met some 17 years ago when they lived in the same condominium complex in Santa Monica. After being introduced by their real estate broker, Judy used her design skills to help Chuck refurbish a new home he had purchased. Their relationship grew into a marriage strongly focused on giving back to the community through volunteer work. That includes providing support to Providence Saint John's Health Center. In addition to volunteering at the hospital, Chuck and Judy recently made a provision in their wills to leave Saint John's with a charitable donation. "I appreciate that Saint John's is a community hospital that serves such a great need and doesn't turn anyone away," says Judy. Born and raised in Cleveland, Ohio, Chuck had been a longtime bond specialist at Fiduciary Trust International in New York when he moved to Los Angeles to run the company's local office. He retired in 2000 and began volunteering at the Saint John's front desk the next year. Chuck became acquainted with Saint John's through his internist. He received a new hip at the hospital eight years ago and recently had surgery to replace a knee. "It's such a high-quality institution—a pillar of the community since 1942 that retains the compassion and focus on personal care that the nuns first brought to it," he says. "It feels like family." He won the Health Center's 2008 Volunteer Values in Action Award and receives great satisfaction from his weekly work on Thursday mornings—greeting people when they first arrive at the hospital, helping them sign in, giving out visitor passes and answering questions. "I also escort people to where they're going," he says. "A lot of people really appreciate that when they're stressed out about being in the hospital or are visiting for the first time." Judy was a Saint John's hospital patient in January when she had back surgery that enabled her to resume dancing four days a week. The Boston native, who retired from her design business, has volunteered in the gift shop on Thursday afternoons for the last eight years. In 2018 she won the Volunteer Values in Action Award, which recognizes excellence, justice, compassion, integrity and dignity. "I love the gift shop," says Judy, who also enjoys painting and has donated prints of two of her paintings that hang near the Flora Thornton Conference Room. "A lot of people who come in use me as a therapist. They're stressed over a loved one being in the hospital, and I listen to the stories they tell. I've also made friends with so many of the nurses and women doctors. And because they don't have time to go shopping, I get to be their fashion adviser." Like other gift shop volunteers, Judy is a member of the Irene Dunne Guild, which develops, participates in and supports a variety of ongoing volunteer projects, events and fundraising initiatives at the health center. Her first financial contributions to Saint John's began years ago, when in lieu of Christmas gifts for her many design clients she made donations in their names to the health center. One of the Becks' first donations as a couple was to establish an endowment for the ongoing education of the nursing staff. They went on to make a legacy gift—putting the health center in their wills—and are now discussing establishing a charitable gift annuity. "The Becks are among a group of health center supporters who give of both their time and their assets," says Andy Trilling, vice president of legacy gifts for Saint John's Health Center Foundation. "Chuck and Judy are truly compassionate people and care for Saint John's. They epitomize philanthropy and what it means to support something they truly care about," he says. "Coming from the financial world, Chuck is incredibly savvy and we are grateful to have his confidence and support." "Because neither of us has children, we have a little more money than we need for the rest of our lives," says Chuck. "We are at a stage where helping others is one of our focal points. Why wouldn't we want to support a place that is known nationally and internationally for its quality of care and medical expertise in so many areas? It helps so many people and is still known for the compassionate care of the incredible doctors, nurses and staff, which we have seen and felt deeply both as volunteers and patients."