The most meaningful way
anyone can make a difference.

The most meaningful way anyone can make a difference.

Looking on the Bright Side 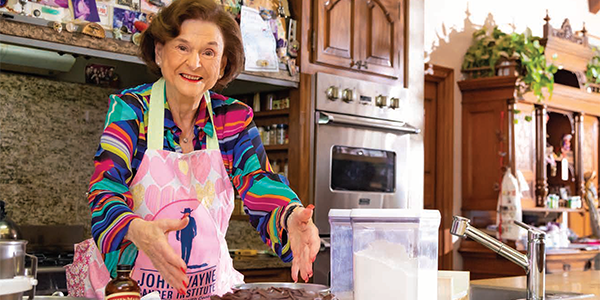 The beloved "Ruthy's" philosophy is: If you've got it, share it.

At age 91, Ruth Weil's impulse is toward caring for people. It always has been. She's a volunteer, past president and active member of the John Wayne Cancer Institute Auxiliary and philanthropist at Providence Saint John's Health Center. In her youth, she intended to channel that impulse to care for people by becoming a physician.

An A-student who was always ahead of her older classmates, Weil reluctantly switched her major to English at Penn State University after the repeated discouragement by the professor of her first pre-med class during sophomore year. He told her, "We don't want women doctors."

Today, Weil is one of Saint John's longest-serving volunteers both at the hospital and at the John Wayne Cancer Institute as a benefactor of its cancer research and education. She's also no stranger to cancer.

Years ago, she lost aunts and uncles and first cousins to the disease when no one dared utter the word "cancer." When she lost her 50-year-old brother to stomach cancer, she became involved with the institute.

Twenty-four years ago she lost her husband, Marty, to cancer. In 2006, her daughter, Randy Weil, died from breast cancer. Weil herself is a survivor of breast cancer. All received care at JWCI.

"They are the reason why I'm very involved," says Weil. "If you've got the resources, you've got to share it with the community. This was the motto in our house. Everything I donate is for research and treatment of cancer patients because I want to find a cure for cancer. It's incredible all the things we've learned in the past 10 years. It's exciting and wonderful as a volunteer to see a patient coming out of the exam room, and I see a smile on their face and a smile on their doctor's face."

Having raised more than $2 million for JWCI, Weil established the Martin H. Weil fund, which funds the Ruth and Martin H. Weil Laboratory for Cancer Research. In 2016, she was honored with the first-ever Donald L. Morton, MD, Legend Award for making a lasting contribution to cancer research and education.

At the awards ceremony, Weil made a surprise announcement of her $1.5 million endowment of the Ruth and Martin H. Weil Surgical Oncology Fellow at the Institute. The endowment funds surgical fellows from around the world. She welcomes them, hosts the annual graduation party at her Westside home and even sometimes counsels them.

"Sometimes they come to me and ask advice about personal problems: 'Ruthy, what should I do?' I get to know their children—one former fellow's child calls me Grandma."

She continues, "I take care of other people. I grew up in the Depression. I wore shoes, but kids came to school barefoot. I'd bring them home and give them bread and butter. This is how I was brought up. That's the way I raised my children."

Originally from a coal-mining town in Pennsylvania, Weil moved to Southern California after graduating college. She met and married Martin and later directed the business management department at Weil & Co., a CPA firm. The couple had two daughters. Today their daughter Sharon Weil and three granddaughters live just minutes away.

Weil will extend her support of cancer research into the future through a generous gift to JWCI in her will. Excited about the recent success of immunology treatments for cancer, Weil is optimistic about a cure.

While she continues her philanthropy in support of the John Wayne Cancer Institute and sits on various boards focusing on cancer research, Weil is also a frequent presence at the hospital. On Tuesdays, "Lady Cake"—a nickname given to Weil by her husband in a nod to her baking prowess—brings sheet cakes to share. "They love my chocolate cakes," she says. "They're gone within 20 minutes."

She was a patient hesitant to have surgery, whom Weil had talked through going forward with it. "I see her later, hair on her head, and she doesn't have cancer anymore," Weil says. "And it's incredible."

On any given day, a doctor might come out of a room, see Weil sitting there and blow her a kiss. "That's my reward," she beams. "That's why I do it."